Flaming Picots has a lot of character with its twelve flames burning around a circle! Use the six bigger spaces to thread through parts of another flower. Alternatively, thread them between the two stitches that form the six "spokes" of this fiery wheel! 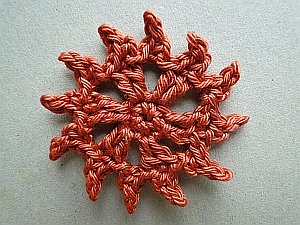 SM into the top of the 3 ch where you just joined, as we will join in here at the end of Round 3.

*picot; ss into next dc on Outer Circle.

Repeat from * to * 5 times, working your last ss into the top of the 3 ch you joined into at the end of Round 2 (stitch marked.)

Tie off; weave this end to the back through the same chain you joined into and then down and around the middle.